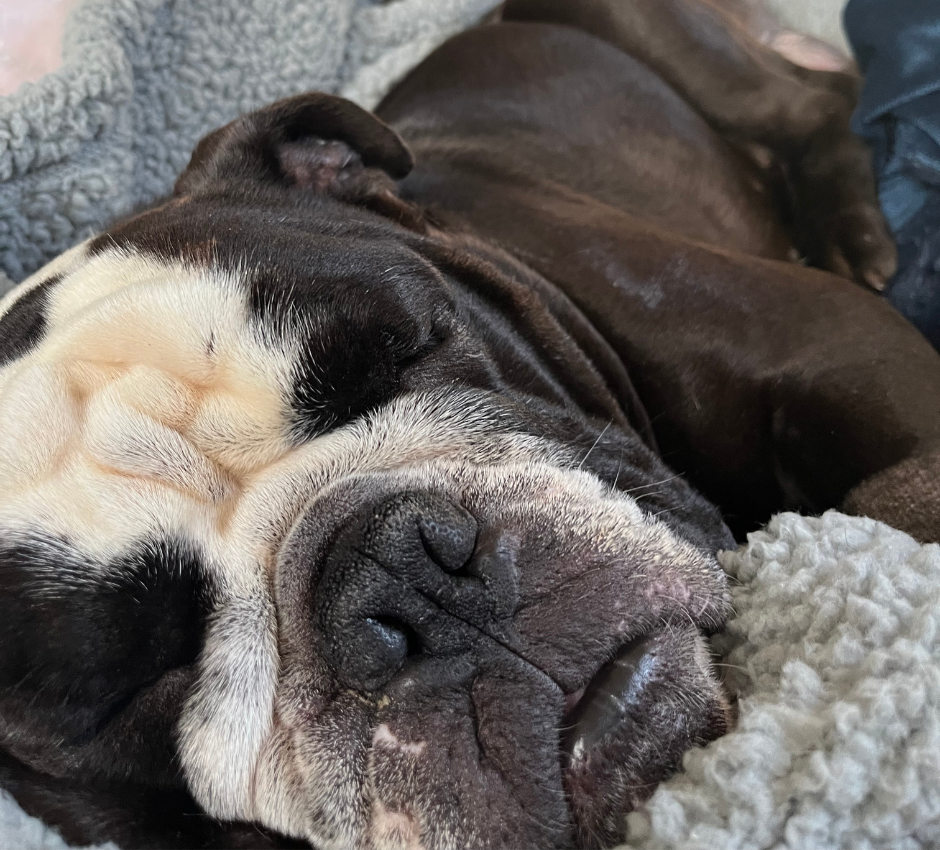 Brutus, now known as Bert which his mom, Natasha, says he picked himself after she tried several names for him! Every time she would say, Bert, he came running and flopped over on her.
Finding Bert was happenstance. Natasha saw one video after she decided she was ready to adopt a dog again after her English Bulldog, Banana, passed away this past Christmas due to a heart tumor.
Natasha grew up with bulldogs and always had one in her life and was finally looking to adopt again.. and BAM there was Bert!! One video of him and she was in love. So after filling out an application and completing a phone interview with one of our adoption coordinators…(Here comes the amazing part) in less than 12 hours she dropped EVERYTHING and was driving to Delaware from Milwaukee, WISCONSIN!!!
Natasha said that everything felt so meant to be. Bert was a little shy at first, but the second she got him home he was happy as can be. All he wants to do is cuddle nonstop (which includes sleeping with his giant head directly on top of your head), and eat, eat, and eat again. She likes to say Bert is allll beauty and some brains When he’s excited to see you or knows you have food, WATCH OUT because he’s running to you and knocking everything down in his path. And he will watch you eat every bite of food, while about a gallon of drool pours out of his mouth. He is truly a 50lb ham. The past week with him has been one of the best of her life – and Natasha thinks Bert would agree (especially when he gets to take up 3/4 of the bed at night.) He’s still learning his manners but he’s just a big snuggly-man at heart. Natasha thanks all of the staff at Faithful Friends for taking such good care of him and for choosing her to be his forever home. She loves him so much.