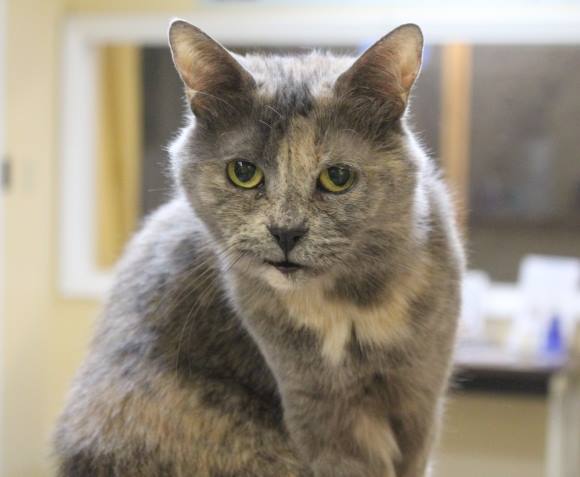 Chassie arrived at Faithful Friends in 2007 as a kitten and spent 15 years at our shelter as a free roamer in the office area. FIFTEEN YEARS!!! That’s close to 5,500 days.

Until Marina, our Medical Operations Manager decided enough was enough and took her in as a foster. Chassie and Marina had a special bond while she was at the shelter, and quickly became one of Marina’s favorite cats to visit throughout the day.

Last week, Marina offered to take Chassie home with her so she could have her own forever family!

Chassie is slowly but surely becoming accustomed to her new space! Marina has caught her napping in her cat bed by the window and even claiming Marina’s bed as her own! She absolutely adores being pet and has started to cuddle up at night. She recognizes the bedroom as her safe zone and likes to hide under the bed if overwhelmed (Marina created a nice bedded cave for her under there so she feels safe and comfortable).

Over the last few days, she’s spent less time under the bed and more time by the window. She appears to be getting more confident! Marina has slowly been letting her and the other cats see each other but not interact yet, there’s some interest but knows that it will take time. For now, she has the bedroom to herself. Her appetite has been fantastic and she gets excited every time she brings out the wet food!!